Showing posts from November, 2013
Show all

AWT Behind the Scenes • Jewelry Storage. 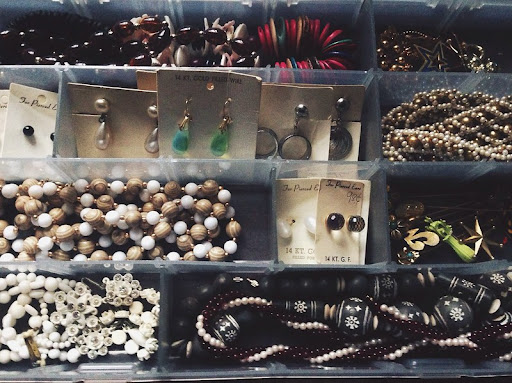 I'm starting a new series here today on the blog, AWT Behind the Scenes. I know that I've shared a lot of behind-the-scenes stuff here in the past, but now it's an official series. Since I've been so busy lately (more on that soon, I promise), I haven't had too much time to focus on either of my shops or this blog, for that matter. Every now and then, I get an extra hour off in the mornings, or some time after work to catch up on things. I decided that if I can't work on the shops full steam, that little-by-little would have to suffice. That being said, I'm also very much focused on streamlining and organizing. I want everything related to AWT/WPC to be easy and seamless. This little box once only held a few pieces of jewelry, and these days it's almost full. Who knew when I started the shop almost four years ago that it would turn into what it is now? Anyway, I had this little container since I was a kid, probably to store Barbie's shoes or someth
2 comments
more »

Wishing each and every one of you a Happy Thanksgiving. Hope you had a wonderful day. xoxo
Post a Comment
more »

How to Wear Vintage • Librarian Style. 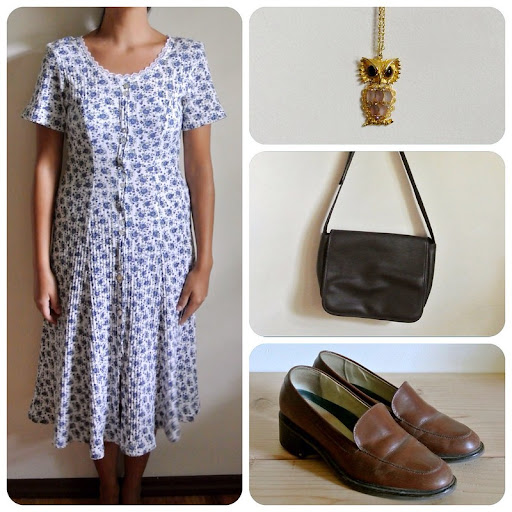 Hey y'all! I'm back from Disney World and more tired then when I left. Haha! It took a few days to settle back into my normal schedule, but all orders are out and I'm back to business. I'm pretty sure I've mentioned this before, but I work Friday, Saturday, and Sunday nights, so my weeks are always out of whack. This morning, however, I had a burst of energy (blame it on my Major Lazer Pandora station) and got a few new listings up in the shop! Everything in the shop is still 45% off + the next 3 orders can use code "MILESTONE" for an additional 15% off. Help me hit 900 sales! :D I'll be back tomorrow with a new How to Wear Vintage post, then a few posts about Disney next week. Hope you're having a great weekend. xoxo
Post a Comment
more »

How to Wear Vintage • Neutrals. 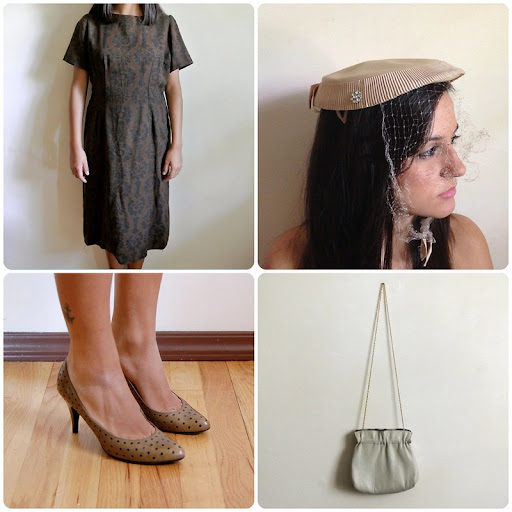 I am so into this dress, it's not even okay. Damn it for not fitting me! I would wear this pretty thing all the time if it did. For this week's HTWV, I decided to do a little bit of power-clashing , pairing a floral print dress with polka dot shoes. I kept the colors neutral so the outfit as a whole wouldn't be too overwhelming. What do you think of mixing patterns? Did I go too far here? CLEARANCE SALE - Vintage Brown Handmade Dress - Floral Print Dress - Size Large CLEARANCE SALE - Vintage Heels - Olive Brown Polka Dot Heels - Size 6 / 6.5 - Charles Jourdan CLEARANCE SALE - Vintage Fascinator Hat with Bow and Rhinestones CLEARANCE SALE - Vintage Leather Purse - Cream Leather Thin Formal Purse with Adjustable Shoulder Strap ATTENTION! – all vintage in the shop is 45% off right now + take an additional 15% off with code MILESTONE! Looking for more How to Wear Vintage posts?
Post a Comment
more » 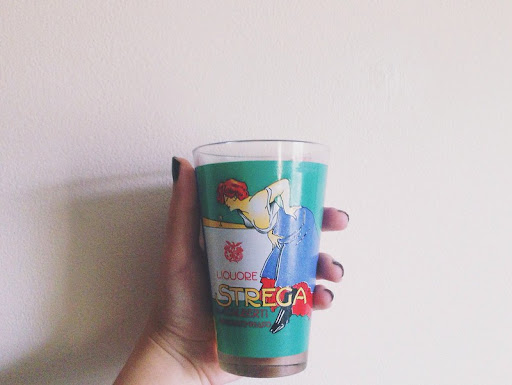 A quick thrifting trip with my sister the other night yielded a bunch of new goodies for the shop, and this awesome glass for me! "Strega" is an Italian word for "witch," which my mom, sister, and I lovingly call each other from time to time. Haha! This glass is extra-cool because on the back it gives a recipe for a drink called "Cool Witch Cocktail", a mix of Strega , gin, red orange juice, and ice cubes. Must try this. And the glass gives you the fill lines right there, so it's nice and easy to make. An excellent thrift find for only fifty cents, wouldn't you say?
2 comments
more » 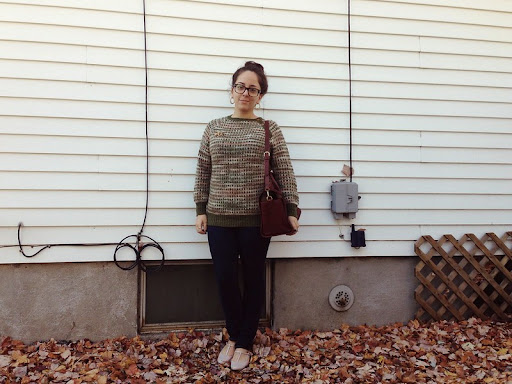 You know how sometimes you're looking forward to something...and all you can do is wish and hope and pray that time goes by quickly until that something gets here...and it sorta works because your days fly by and blur together...and suddenly you're at the thing you've been waiting for? Well that's kinda how I feel today. My sister and I planned a last-minute trip (even though we've been talking about it for months, we only booked flights on Tuesday) and I'm so excited to go away with her! We've been sisters for 22 years, and this will be our first time traveling with only each other! The thing I'm here to complain about, though (isn't that what blogging is all about? No?), is how I wished this week away in the blink of an eye. I don't know about you guys, but since becoming a "grown-up" (graduating college, I guess?) time has been FLYING. Daily, weekly, monthly, and yearly. Is it really November of 2013?! I thought about it and
2 comments
more » 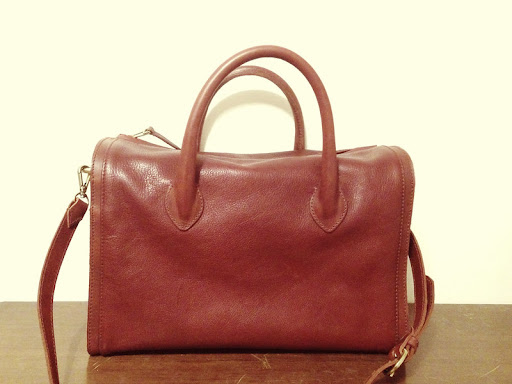 I'd like to introduce you all to my new girlfriend, the Madewell Camden Satchel. She's a beaut, ain't she? Erica and I are going on a little sister-trip soon, and this lady will be the perfect travel companion. Can't wait to break in the leather!
2 comments
more » 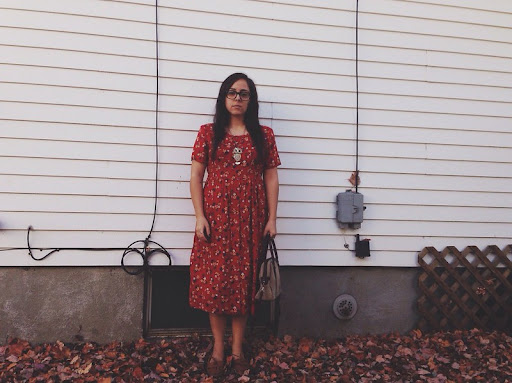 I really love posting my outfits here on the blog, but outfit posts tend to be few and far between. I can make plenty of excuses for why I don't do outfit posts as often as I'd like, but I won't. Maybe it's due to the seasonal change, but lately I've been thinking a lot, analyzing why things happen and what I can do to change them, and solving problems instead of making excuses. I'm turning over a whole new leaf. We had some lovely weather today, so I wore this cute dress from the shop . It's warm enough outside that I didn't need tights. I love fall, but I am quite happy it's not super-frigid like it was last week. We've got plenty of time this winter to be freezing, right? Quick reminder – all vintage in the shop is 45% off right now! glasses: Derek Cardigan via Coastal.com dress: vintage, in the shop now necklace: gift purse: vintage, in the shop now shoes: Moosehide Driving Mocs c/o Minnetonka
2 comments
more » 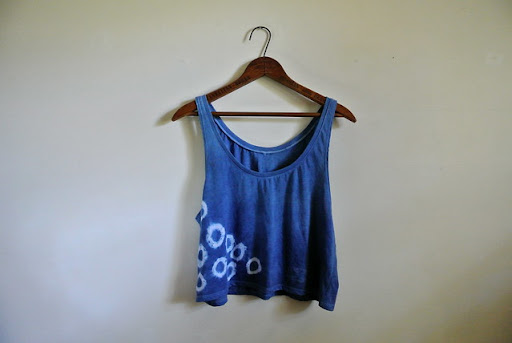 Hello, friends! I have a great giveaway for you from my good friend Maggie. Up for grabs is this cluster tank, dyed with indigo using shibori dyeing technique, in size Medium. Here's a little about her: I am Maggie Pate and I run inks+thread, textile and scarf collection. The natural delicacies of southern wildlife and the geometry present in the city-scape ignited my love of patterns. These patterns manifest in the form of diaphanous scarves made of silk, cotton, or chiffon. All the patterns begin as watercolor paintings. Some are painted by myself, others by friends and artists: Beca Lewis and Danielle Tanner contributed to the 2013 collection. When I am not at home working on textiles; I can be found pairing together blooms from my garden, day-tripping to waterfalls, and hunting in antique markets. Ever longing to pursue an intentional life with focus on the small nuances of being. As of late, I have taken a dive into natural dyeing - scavenging for natural hues and creati
8 comments
more »

So, I know I said the most recent sale was going to be the last sale until Black Friday, but I can't help it. Everything in the shop is 45% off. Check it out! :)
Post a Comment
more »

How to Wear Vintage • Be Bold. 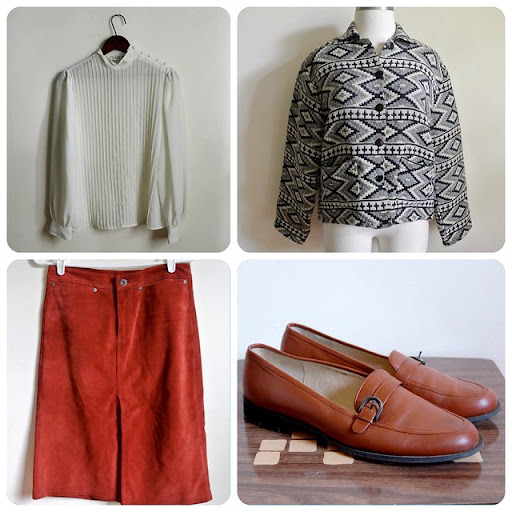 Halloween is over, which means it's pretty much winter, right? I can't lie though, I don't mind the sudden rush of Thanksgiving and Christmas/holiday marketing that is EVERYWHERE all at once. The holidays are so wonderful, why not stretch them out a little bit longer by starting them earlier? And how great was it to get an extra hour of sleep last night? For today's HTWV post, I decided to go bold and pair this bright red skirt with this crazy geometric print jacket. Add a simple blouse underneath and a pair of comfortable neutral shoes to bring it all together. Vintage Geometric Print Jacket Vintage Blouse - Sheer Off-White Long Sleeve Blouse with Pleated Design - Size Medium/Large Vintage Red Leather Gap Midi Skirt - Size 2 Vintage Brown Loafers - Ros Hommerson - Size 9.5 Looking for more How to Wear Vintage posts?
Post a Comment
more » 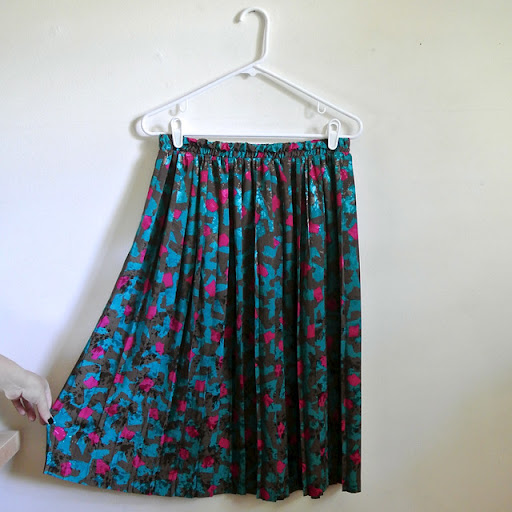 Here's a little tiny preview of some clothing items coming to the vintage shop this week. More to come! Email me at awildtonic@gmail.com for more info about any items or to reserve.
Post a Comment
more »
More posts