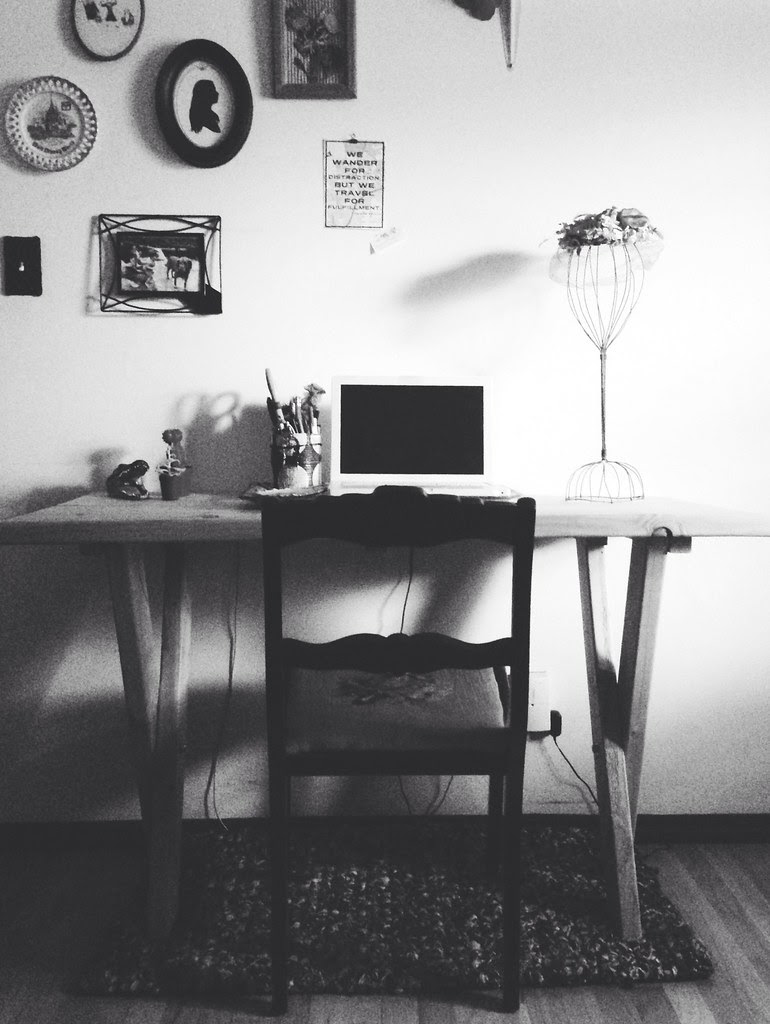 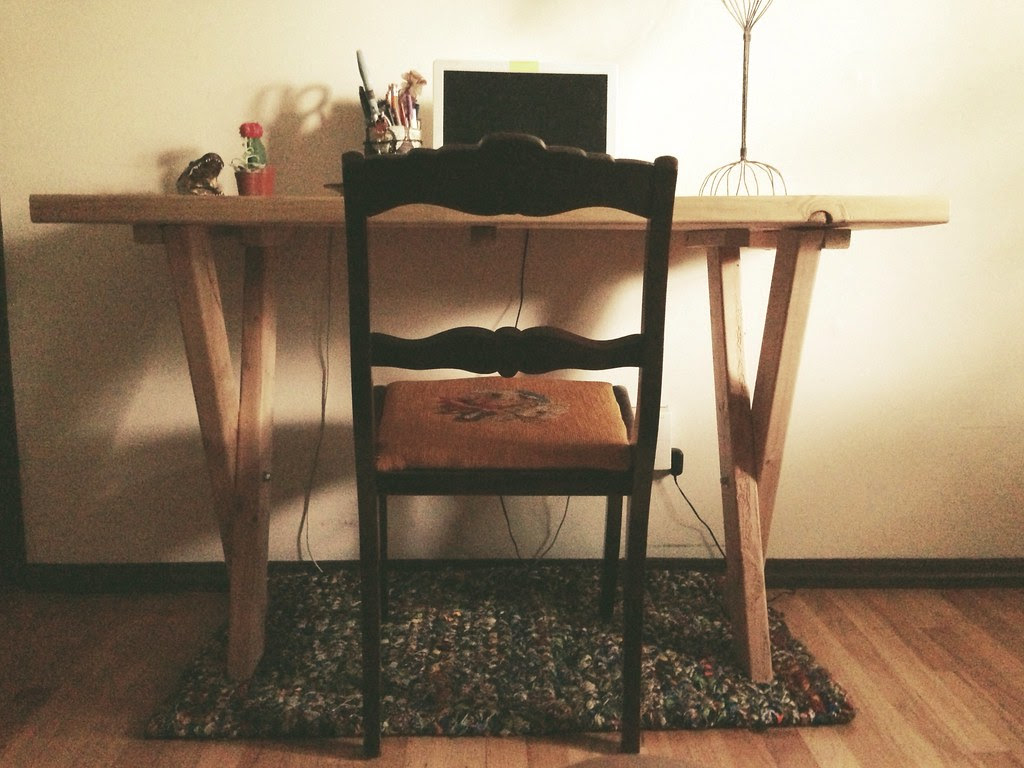 This post was originally going to be called "How to Build a Farm Table for Less Than $50 in 24 Hours," but sadly that would be a lie. Here's the (somewhat long) story. As I've mentioned in the past, I still live at home. My bedroom is pretty small and it doubles as my office. Some days, I had difficulty staying motivated (or even becoming motivated) because my "desk" was my dresser. I had to sit with my legs to the side or crossed "pretzel style" if I wanted to work on my computer, and I work on my computer 90% of the time. I would easily get uncomfortable and my bed was five feet behind me, so obviously I would lay down and get nothing done for the rest of the day. It proved to be terrible for my productivity and consequently for my mental well-being. I decided I needed a proper desk, but I was faced with a few problems. I didn't have a lot of money to spend, I didn't want to buy something cheaply made, and I had a very specific idea in mind of what I wanted. I mentioned this to my mom and she suggested we try building one. My mom learned a lot about carpentry and other general handyman type things from her father, and in turn taught it to me. We figured we could easily build a table for less than $50 and in less than a day. We spent a few days researching and measuring, planning and meandering around Home Depot. Finally we bought our supplies: a long piece of wood (16' x 12" x 2"), a pack of screws, and a sanding block (also gold spray paint for an unrelated project and some stain and a brush that I didn't end up using). The guys at Home Depot cut the wood into four pieces, and my dad cut a piece of that wood into four legs. I sanded all the wood down. Mom and I attached two pieces of wood together with three smaller pieces as support beams. Then it was time to add the legs. Here's where the project crossed the "...in 24 Hours" line. Admittedly, we were both very anxious to get the project finished and we were working with a hand saw, which wasn't the right tool (I know, I know, "a bad workman always blames his tools"). So we hastily cut the legs and they ended up being uneven. Also, since I wanted the legs in an X instead of straight down, we ran into a problems attaching them to the support beams. We decided the best thing to do was cut out little pieces from the legs so they would sit flush on the beam. Well, between those terrible cuts and the general unevenness of the legs, the table ended up super crooked. We tried again the next day and it still wasn't right. Defeated, I went to sleep, ready for another week of no productivity. After a few days of whining, I figured out a better way to attach the legs. I also realized that Frank's roommate owns a nice saw that I could use. I bought a new piece of wood and cut all the legs perfectly. Mom and I screwed the legs to the beams and there we had it--a table. Truth be told, it's still not 100% perfect, but I was WAY TOO VERY exited to have a table and get to work, I didn't mind. One day in the future, I would like to take the legs off and reattach them a little bit better, but for now it gets the job done. I'm not going to do a step-by-step for you guys, since I pretty much explained everything above, but if you have any questions send me an email or leave a comment and I'll get back to you ASAP. :) 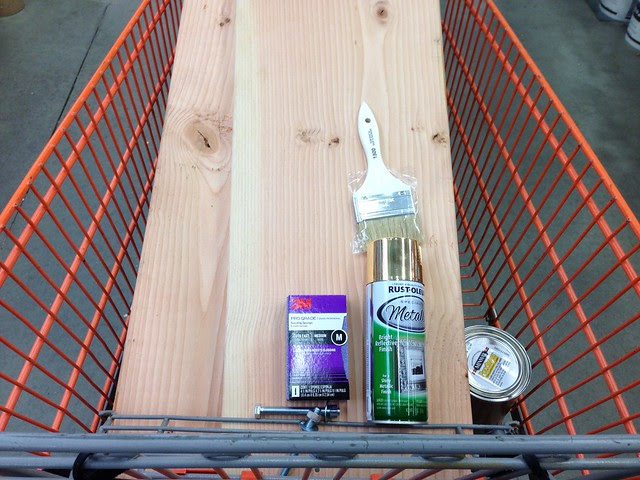 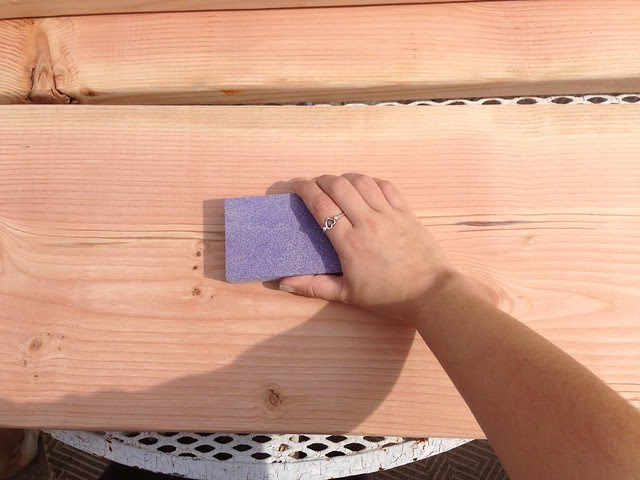 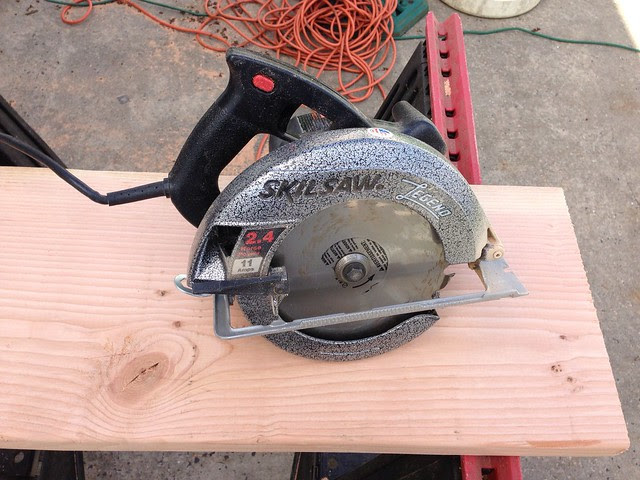 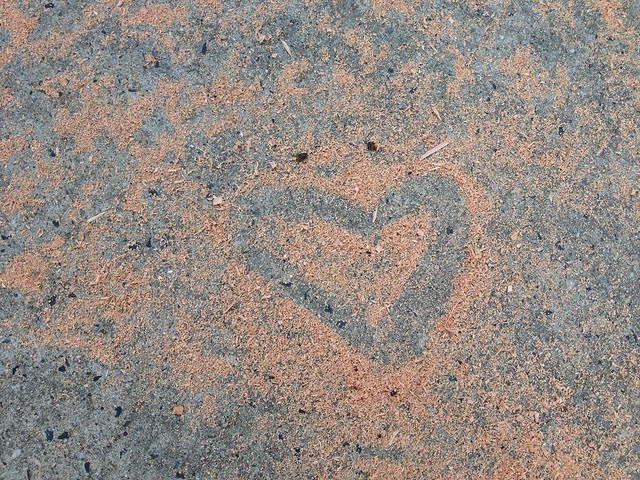 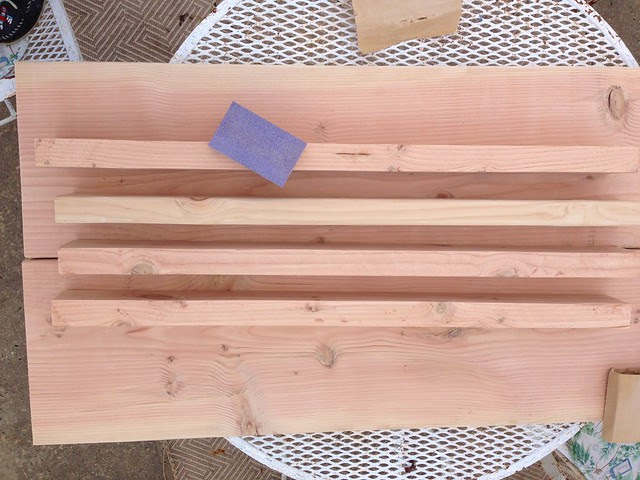 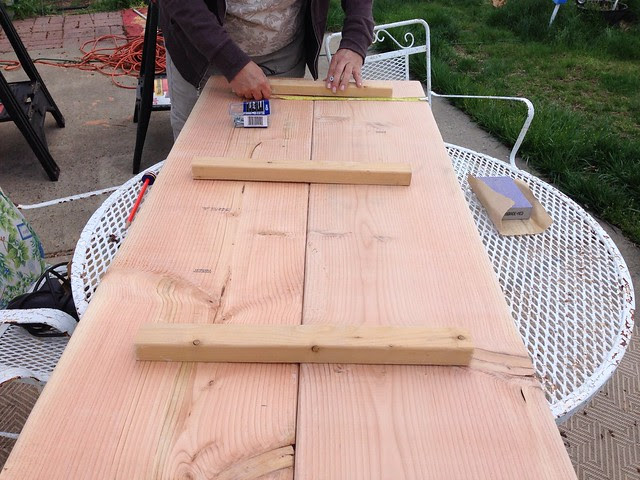 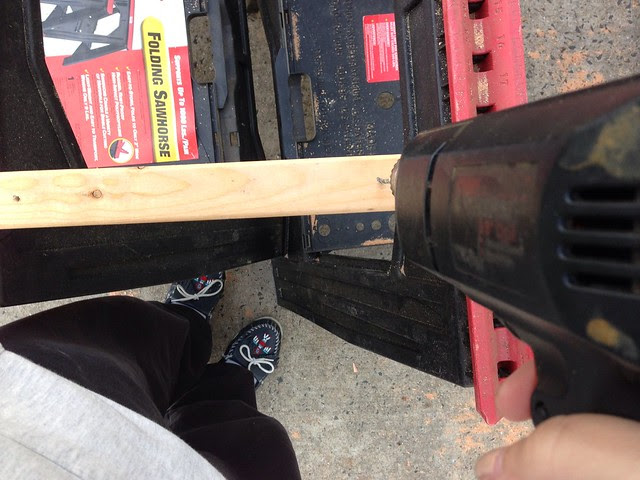 Screwing in the beams. 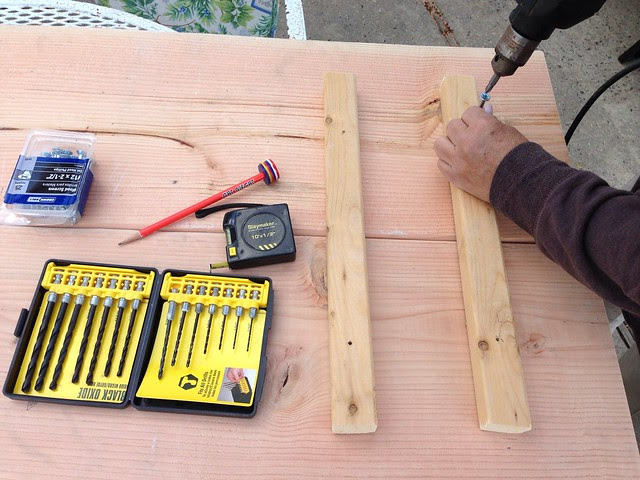 This is where things start to go wrong. The next three photos are examples of what NOT to do. 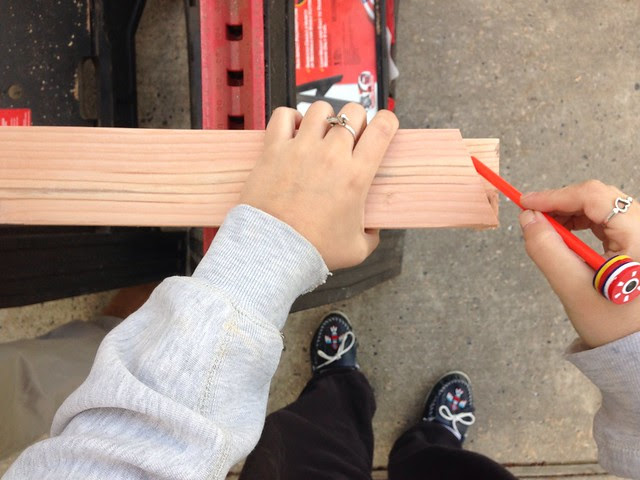 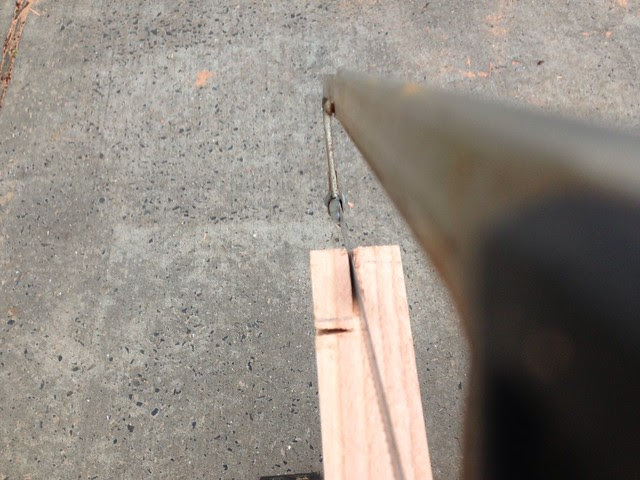 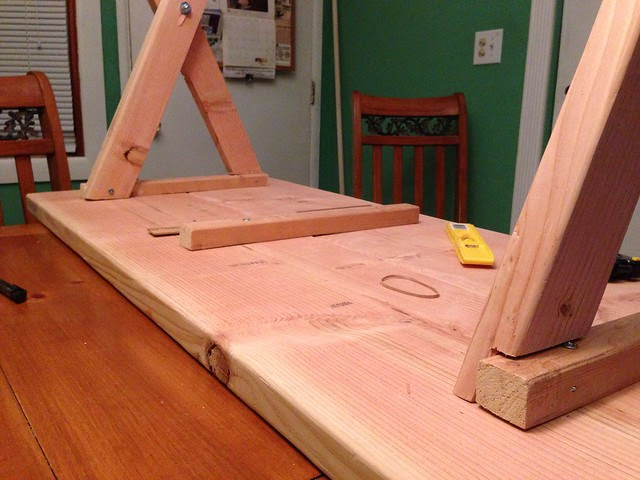 The table with new legs! 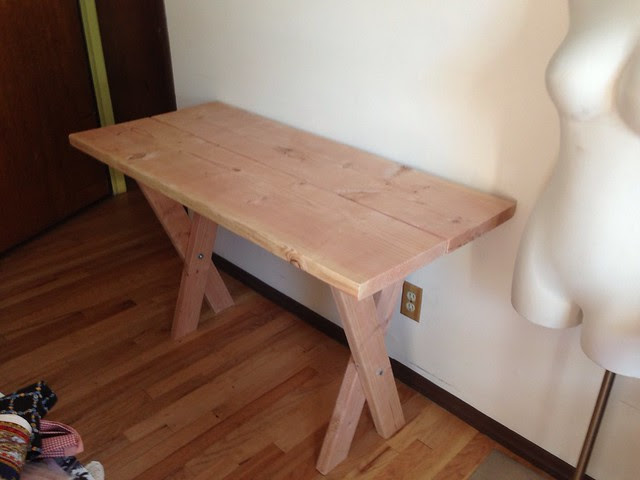 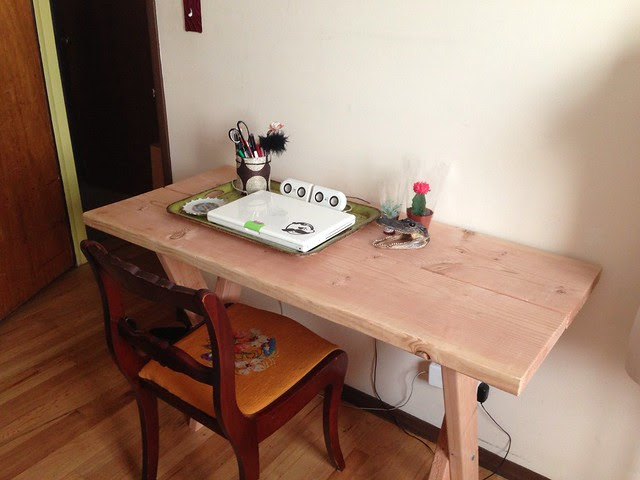 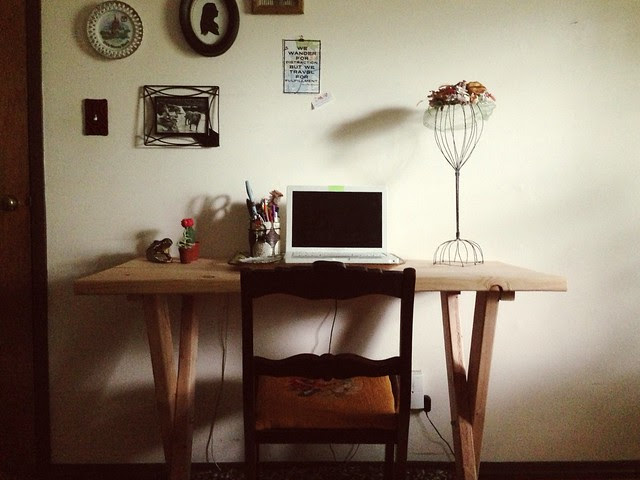 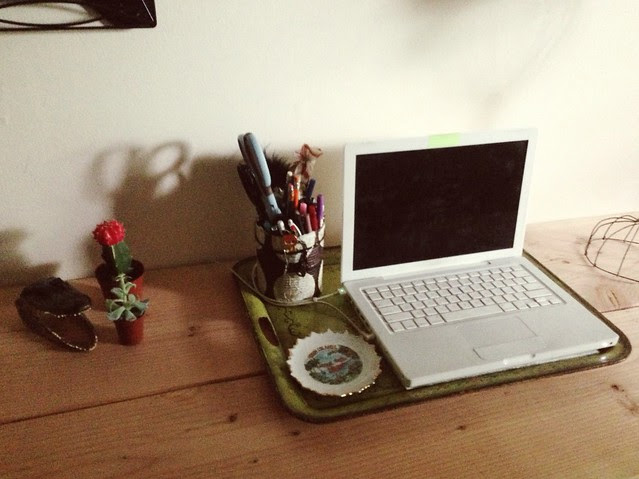